The Criminal Investigations Department (CID) of the Ghana Police Service has invited three Hot FM employees, who were with Apostle Kwabena Owusu Adjeiat the time of his arrest on Tuesday.

Apostle Adjei, the General Overseer of the Hezekiah Prayer Ministries, was arrested during a Facebook live interview with Hot FM at Greda Estate at Spintex.

READ ALSO; Owusu Bempah teamed up with Hot Fm to set Prophet Owusu Agyei up for the arrest- Oheneba Bennie

A letter to the radio station sighted by Ghsplash.com asked the station to release the interviewer, Isaac Darko Boamah, Awal Saeed Mohammed and one other described as “Gargantuan lady”.

They are to report to the CID Headquarters on Monday, June 15, 2020, at 10 am to assist with investigations.

“It would be appreciated if you could release the host of the show, Mr. Isaac Darko Boamah, Mr. Awal Saeed Mohammed, and the said lady to report to Superintendent/IU at the CID Headquarters, 4th floor, room 13 on Monday, 15/06/2020 at 1000hrs to assist with investigations,” the letter noted.

The prophet has since his arrest reportedly tested positive for Tramadol and cannabis popularly called wee.

In his medical records signed by Superintendent of Police, Dr Adwoa Aburi-Panin from the Ghana Police Hospital, the ‘prophet’ however tested negative to cocaine, opiates, alcohol, methamphetamine, cotinine, among others.

Read the invitation letter below: 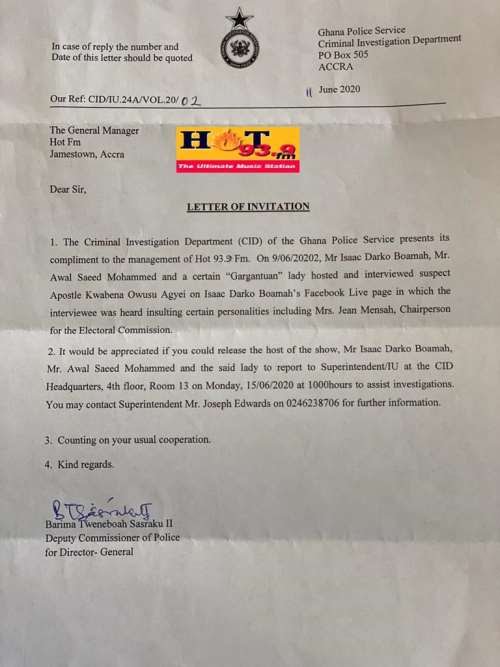